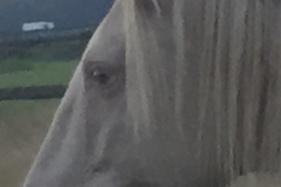 Note: Sometimes it is difficult to determine the status of the eye just from a genetic test and determine whether a horse has any genetic abnormalities. As seen here sometimes the eye can look abnormal and "buggy". This is also not an exact science. A veterinary optometrist/ surgeon or eye specialist should be able to examine the eye and determine what structures are abnormal. If there is any question seek veterinary assistance.

​Abnormalities also do not prohibit the horse  from experiencing a riding career. Many affected horses go on to ride down the trail. However, an owner must note that symptoms MAY OR MAY NOT progress as a horse ages. Also having these connected genes may affect passing them on to offspring.

There is not a genetic test for MCOA gene however we can test for silver genes.

Genotype- genetic make up; consists of two genes or alleles that can be passed to offspring.

Carrier- a horse can carry a gene to pass to offspring but it may not exhibit it in it's phenotype. 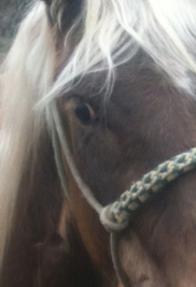 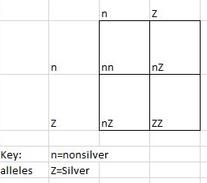 These two terms are synonymous and describe a unique set of eye phenotypes or conformations present at birth. The silver (chocolate) gene is associated eye problems and they seem to be inherited together but as two separate genes. Research still needs to be performed to accurately document the variations within the silver color and eye problems but it appears the Rocky breed isn't the only one. The silver gene is responsible for the chocolate color most people associate with the Rocky Mountain horse. Many Rockies carry the silver dapple gene and this is very important to make sound breeding decisions to avoid inherited eye disorders. Horses can carry one or two copies of the gene. If they have one copy they are least likely to have the full syndrome of effects than horses with two copies of the gene. If a horse has two copies they may have one or many different physical changes to the eye. These can range from cataracts or cysts to a complete inability for the lens of the eye to function or problems with the retina. A horse with two copies of the silver dapple gene are likely to have their vision impaired in some fashion, however a horse with one copy of the silver dapple gene may not physically show any eye abnormalities or may have cysts present that won't cause visual issues. Silver horses may not show it's owner any signs or inhibit it's ability to be ridden. In some cases the symptoms seem to become more apparent later in age. HOWEVER, there are many other environmental eye ailments that have wrongfully associated with the silver gene and named MCOA.

It is a popular to have brood stock that carries two copies of a color gene to pass on Chocolate color 100% of the time. This has been the case of chocolate colored Rocky Mountain horses. In light of MCOA, a more sound breeding decision would be to avoid breeding silver dapple horses to silver dapple horses. Genetic testing can inform breeders how many silver genes are in their brood stock and help to make educated choices regarding the silver dapple gene. It is advisable to breed a chocolate or silver gene horse to any non-silver gene horse - such as a black. 100% of the offspring would have minimal chances of eye abnormalities, at least avoid the full MCOA syndrome that would impair their vision. A chocolate horse with one known black parent would only have one copy of the silver gene. A horse with both chocolate parents has at least 25% or higher chance having visual abnormalities. See the chart below to see the different combinations with the silver gene. Sometimes the silver gene is present but is not seen such as a sorrel. This is known as a carrier.

Carrier colors include: Sorrel, palomino, cremello, red dun, red roan, perlino, grey. These colors would typically hide the silver dilution. Other color modifiers may also hide the color dilution. As a rule of thumb, if the horse has a base of black or E_ and 2 silver (ZZ) it is usually lighter or "chocolatier" than normal BUT this isn't always true.