The 5 Sons of TOBE

Enjoy this promotional Video from the RMHA 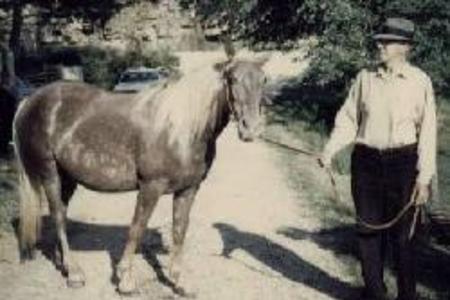 Sam Tuttle with one of his mares

​​The Rocky Mountain horse is said to be derived from Jennet or Spanish blood, this is different than most other gaited horse breeds that are the most popular in the USA today. This breed has a relatively new breed association and with demand climbing there are barely enough breeders supplying the marketplace. The RMHA was founded in 1986 with the intent to preserve and promote a unique and rare breed.

The early history of the breed is largely derived from family stories going back to the 1800's. A family traveling west from the Appalachian foothills is said to have had a chocolate colored stallion with white mane and tail. Upon trying to settle in the west, destined for the Rocky Mountains, they had failed settling and returned home. This stallion was coined as the Rocky Mountain Horse, and the name of the breed was formed. He was crossed to many of the area's saddle mares and a strong genetic line was produced.

However there are other Gaited Mountain Horses rooted in the same geographical area that descend from the Narragansett Pacer, Spanish Jennet, and ambling Galloways of Colonial times as well. The Rocky Mountain horse was not the only one.


The inhabitants of this rural and secluded area (1800-1900's) used their easy-gaiting, sure-footed horses to perform any duty needed on their farms. Plow a field, ride into town, herd cattle or hitch to a buggy for Sunday church. These became family horses that each family member would use and cherish. They felt no need to document the breed in any way but often kept personal breeding records per family. They were not only pets but a necessity to surviving a farming lifestyle in the rugged foothills of Kentucky. These poor farming families would feed them what they could, often corn cobs and even turn them out during summers on public lands. These were hard-working and easy-keeping horses, they had to be because there wasn't another option, as the weak would not be able to survive.


During the 1920's through the 1960's, a man named Sam Tuttle fell in love with the breed. He was largely responsible for saving a large population of the Rocky Mountain horses during the industrial age and World War 2. As roads improved, the need for gaited horses decreased. Farms vanished and so did the prized Rocky Mountain Horse. Sam Tuttle purchased many Rocky Mountain horses he used as trail riding mounts for a guest business he operated as well as stand one famous stallion...TOBE. He kept a sizeable herd of 30-50 horses during this time. TOBE, Sam's stallion, would tote riders through the rugged trails. Those who met TOBE were surprised of his gentle temperament and smooth gait. He was long lived and passed at the age of 37. The traits passed on were his supreme longevity, temperament and gait.


Unfortunately after Sam Tuttle's death, many of his fine horses were dispersed in sales and often sold to slaughter. Many smaller farms did purchase some sons of TOBE and Sam Tuttle's mares. However it is not adequately noted how many great sons and daughters of TOBE were produced. There are only a fraction of these horses traced in the RMHA database put together in the 1980's. TOBE is noted as the foundation sire of the Rocky Mountain Horse. He is said to have 5 sons of TOBE, Maple's Squirrel, Kilburn's Chocolate Sundown, Sewell's Sam, Sam Clemon's Tim and Yankee (probably more). These are the individuals the Rocky Mountain horse is based on today. The Association opened the books up during the 1980's to expand the genetic diversity. This allows for a great range of builds, confirmation, even differences in personality as well as gait. The association has strict breed requirements for registration and certifies breeding individuals to ensure quality of gait and consistencies in confirmation despite this range of different types.